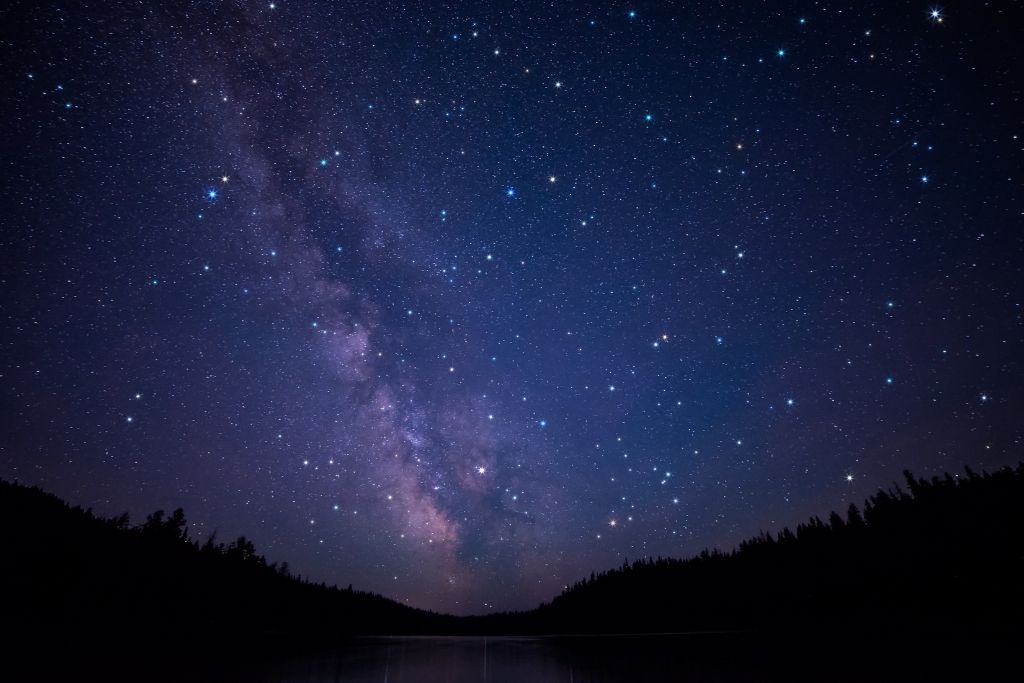 When I was a child, I used to spend Thanksgiving up in northern Michigan with my cousins. I remember standing outside at night in awe as I gazed at the thousands and thousands of twinkling stars that seemed to take over the northern sky. They seemed so magnificent and so close, and it made me wonder, why do stars twinkle?

Though the stars appear to be twinkling on and off like sparklers on the Fourth of July, they really are not twinkling at all. The atmosphere affects the starlight and makes the stars look as though they are blinking on and off. You see, unlike the typical star shape we are used to seeing, stars are actually giant balls of plasma that are millions of miles away. They are in the form of a sphere, just like the sun, which is a star also. As the light from the star reaches the Earth’s atmosphere, it zigzags through the different layers of the atmosphere, bending the path of light rapidly back and forth, making it appear to twinkle.

Are Stars Really Millions of Miles Away From Earth?

All stars are not the exact same distance from the Earth, but they are very far away. The closest star to Earth is 4.24 light-years away. It’s name is Proxima Centauri. A light-year is equal to 5.88 trillion miles, so if someone were to take a walk to Proxima Centauri, it would take them 215 million years to get there!

Now the stars that are closer appear brighter and larger than the ones further away. Because the Proxima Centauri is the nearest star to Earth, if you were to see light from this star, it would be four years old by the time it reached your eyes.

The same goes for the second nearest star, which is Barnard’s Star. It is six light-years from Earth, which means by the time you see the light from this star, the light is already six years old!

Most of the stars we see at night are about a few hundred light-years away. If you want to view stars that are more than 2,000 light-years away, you would need a telescope.

Isn’t it amazing to think that the stars we see shining in the night aren’t really shining that particular way at that moment, but it was how they shined several years ago?

Now About the Atmosphere 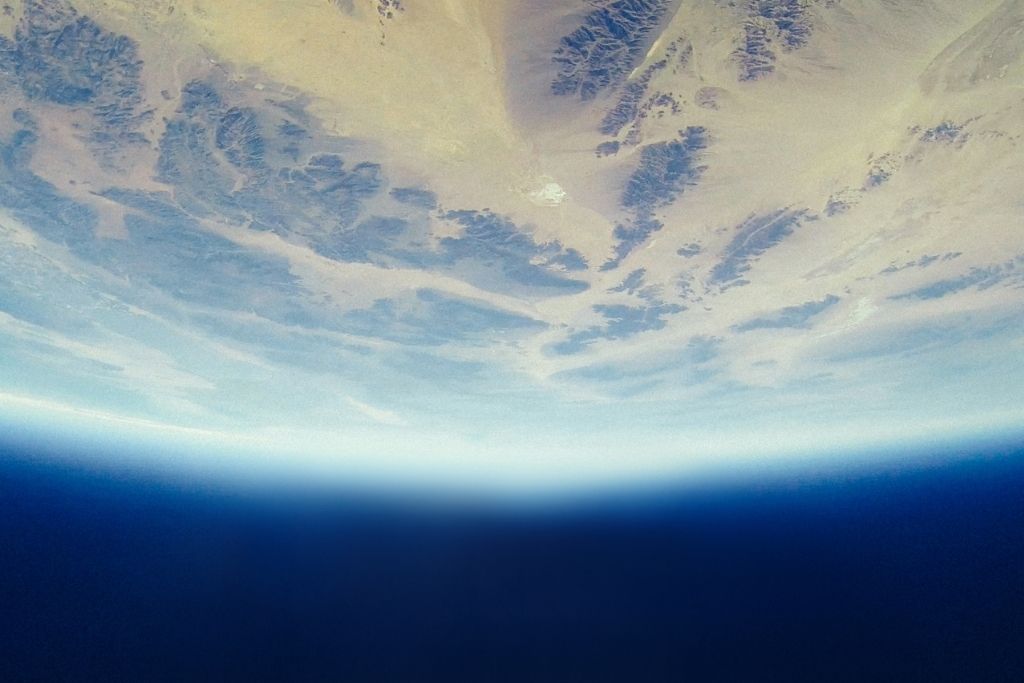 The Earth’s atmosphere is like a protective blanket of air made up of many layers which are based on temperature. It stretches from the surface of Earth to as far as 6,214 miles above. From there, it blends into space.

There are five different layers to the atmosphere, and the light from the stars passes through each of these layers to get to Earth.

The Five Layers of Atmosphere

This layer is closest to Earth’s surface and reaches upward of about 10 miles. Most of the water vapor, dust, and ash is found in the troposphere, where most of Earth’s clouds are located. Temperatures here decrease with altitude.

This layer is the next layer from the troposphere and extends about 30 miles upward. Temperatures here increase as altitude increases.

This layer reaches about 53 miles, and temperatures decrease with altitude. The coldest temperatures in the atmosphere are near the top of the mesosphere. Generally, the atmosphere is very thin but still thick enough so that when meteors pass through this layer, they burn up, giving the appearance of a shooting star.

This next layer reaches about 372 miles, and the temperatures increase as altitude increases.

This is the final layer, and it blends with outer space.

As we discussed above, each layer of the atmosphere has different temperatures. There are also density differences and a lot of wind. As the light from the star enters the Earth’s atmosphere, it passes through each layer, with each temperature, density, and wind difference contributing to the turbulence.

Turbulence, as defined by Merriam-Webster, is an irregular atmospheric motion, especially when characterized by up-and-down currents. If you’ve ever experienced this on an airplane, then you can understand the up-and-down movement.

As the light from the star enters each layer of the atmosphere with all its different temperatures, densities, and wind shifts, it doesn’t stay in a straight line. Instead, it becomes bent and spreads out, appearing to move in a zigzag sort of way. This gives us the appearance that the star is twinkling.

Another thing that happens to the star’s light as it enters the Earth’s atmosphere is called refracting. When the light passes through different densities, some of the light is reflected back, while some of it passes through the atmosphere at a different angle. This is what’s known as refraction, and if the atmosphere is particularly turbulent on a particular layer, the light changes its path very quickly, making the stars appear to move. This twinkling is really scintillation.

Below is an example of how refraction works. 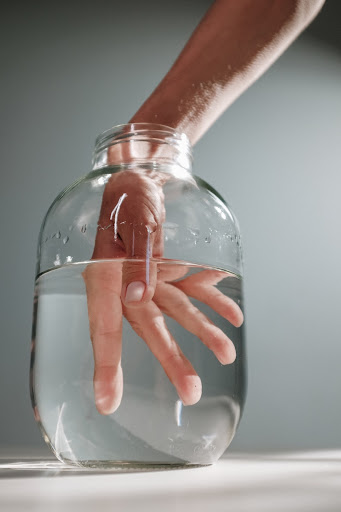 If you notice, when the image of the hand enters the water, the fingers seem to split near the pinky and bend at an odd angle. It is because refraction is the bending of light waves as they pass from one material into another. Though it looks like the fingers are oddly shaped, the only thing that changes the way the image appears is the change in the direction of the light wave.

In this example, the light beams pass through three transparent mediums: water, glass, and air. As beams of light pass from one medium that is slower, such as the water, to another medium that is faster, as in the air, if it reaches the space between the two mediums at an angle, one side of the lightwave will reach the second medium first, thus slowing down the earlier. Accordingly, with one side of the wave going slower, the entire light wave will pivot towards that side, and the wave will bend away from the surface when going into a slower material. So, the part in the water appears to be bent because of the direction of the light.

This bending of light is happening as we look at the stars. The light beams enter the atmospheric layers at differing speeds, densities, and temperatures, causing them to appear to bend back and forth as the light travels.

Stars Only Twinkle on Earth

Do you know the twinkling of stars only happens when we look at them from Earth? If you were to board a spaceship and take off for outer space, the stars would not appear to twinkle? That’s because, in space, you are closer to the stars and above the Earth’s atmosphere. This means you are not seeing light that is refracted as it passes through each atmospheric layer. Instead, you see it above the atmosphere where there is no atmospheric disturbance. Thus, the stars just appear as a steady light with no twinkle.

If the Sun is a Star, Why Does it Not Twinkle?

While the stars are very far from Earth, the Sun is actually the closest star to the Earth. Its distance is about 93 million miles, which is 0.0000158 light-years away.

If you remember, the nearest star, Proxima Centauri, is 4.22 light-years away from Earth. With the Sun being so close, it appears much larger than the tiny dot of a star. Therefore, it doesn’t twinkle.

Like the Sun, planets are closer to Earth than stars, so they also appear much larger than the stars we see as tiny dots. Thus, because they are so close, the light that comes from the planets does not bend as strongly from the Earth’s atmosphere.

Also, unlike stars, planets are not a source of light. Stars experience nuclear fusion, which is the process of combining tiny particles called atoms that release energy. Nuclear fusion creates heat and light, which makes the stars glow. Planets do not glow. They just reflect low-intensity light that is reaching them.

In conclusion, we see that the Universe is vast and amazing – a breathtaking work of art! With all scientists have studied and discovered, they haven’t even come close to uncovering all that’s waiting to be revealed. For instance, scientists have discovered a “supermom galaxy” that gives birth to about 740 new stars each year! Even the Milky Way galaxy only births one new star a year.

No matter how hard we try, it seems like we will never know all that is contained in the Universe. There will always be more to discover.