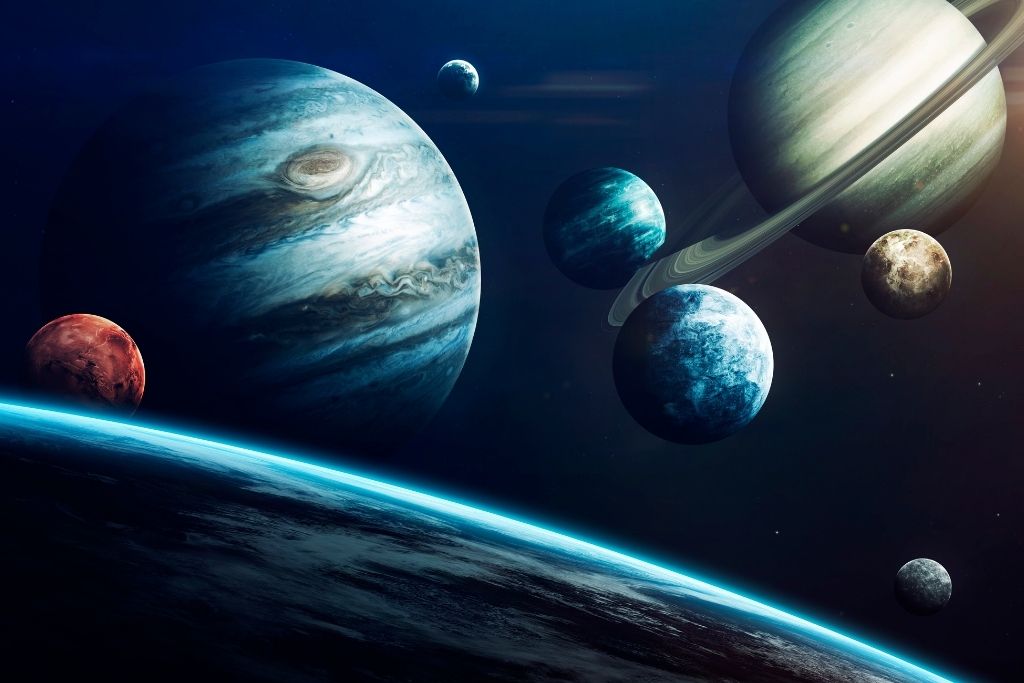 According to the International Astronomical Union

(IAU), a planet in the Solar System is a celestial body that contains these three elements.

By this definition, there are only eight planets in our solar system. But if we included exoplanets, what are the different types of planets?

However, there are also planets that are far outside of our solar system. They are known as exoplanets, and they orbit a star other than our sun.

Different Types of Planets in the Solar System and Exoplanets 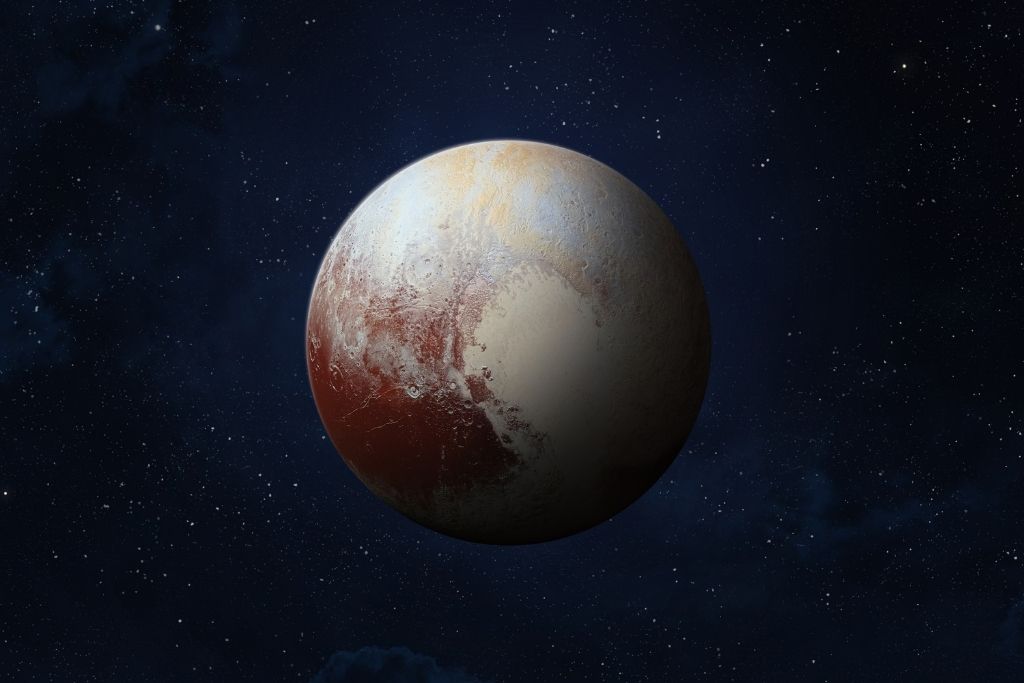 Technically, they aren’t planets, yet they aren’t quite a star either. They can range between 13 to 80 times the mass of Jupiter. They don’t form like planets. They form like stars. They are born from clouds of gas collapsing in on themselves.

walk a fine line between planets and natural satellites. They are big enough to hold their own shape but not enough to clear their orbit of other material. Because of their size, they lack the gravitational forces needed to pull in all of the material found in their orbit.

Of all the dwarf planets known in our solar system, they are even smaller than the Earth’s moon.

There are five recognized dwarf planets in the solar system.

The largest planets of the universe, gas giants, are made up primarily of hydrogen and helium. Our solar system only has two gas giants. They are Saturn and Jupiter.

The hydrogen and helium give gas giants their brownish yellow-ochre color. We don’t know much about the core, but it is estimated to have a molten rocky core surrounded by gas. The core is extremely hot, around 20,000 Kelvin (K).

Because of the gas nature of gas giants, they experience a lot of wild storms with raging winds.

These planets are made up of a much denser gas than those found in gas giants, so they are heavier. They are primarily made of carbon, sulfur, oxygen, and nitrogen.

They are also smaller than gas giants, though still gigantic in nature. The two ice giants in our solar system are Uranus and Neptune.

Though they have the name ice giants, they are not totally made up of ice. They are simply known to have water and water-ice in their formation. They are called ice giants because the majority of the planet is solid and because scientists refer to elements with freezing points above 100 K as ices. Water, ammonia, and methane are similar elements with freezing points above 100 K.

Also known as terrestrial planets, they are mostly made up of rock and metal. The main thing that makes them stand out is that they have a solid surface. Mercury, Venus, Earth, and Mars are the rocky (terrestrial) planets of our solar system.

Though scientists aren’t entirely sure, the planet’s core is made of metal. There is some hypothesis that there are some coreless planets as well.

If there is an atmosphere surrounding a rocky planet, it came from captured comets or was created through volcanic or biological activity. Rocky planets have been known to form a primary atmosphere, but they do not last.

An ocean planet is thought to be covered by, or made up of, predominantly water. Similar to the rocky planet, they are either covered in liquid water or an ice layer over liquid water. Ten percent of their mass is water, and their oceans are hundreds of miles in depth.

In 2020 astronomers discovered an icy sphere the size of Texas between Mars and Jupiter. This dwarf planet, called Ceres, is actually an ocean world, and they realized it’s not the only one. They also discovered that Pluto has an active underground ocean, too.

As scientists continued their research, they were surprised to see what appears to be a wet solar system with many hidden potential places for life.

Astronomers have found between 70 and 170 rogue planets. These are planets that are free-floating. They currently do not orbit around a star.

They are a mass of unattached planets approximately the size of Jupiter and lie in a region of the Milky Way known as the Upper Scorpius OB Stellar association. This area of the sky lies 420 light-years away from Earth.

Silicate planets have a solid crust, a silicate mantle, and a core made up of iron. They can also have mountains, canyons, and valleys. The four planets closest to the sun are silicate planets: Mercury, Venus, Earth, and Mars.

There are no puffy planets in our solar system, but a few have been identified beyond our solar system. They are considered gas giants that live close to their stars. The temperature emanating from the stars combined with their internal heating causes their atmospheres to expand or inflate.

Puffy planets are also referred to as hot Saturns as their density is similar to Saturn’s.

Protoplanets are small celestial objects about the size of a moon. They are even smaller than a dwarf planet. 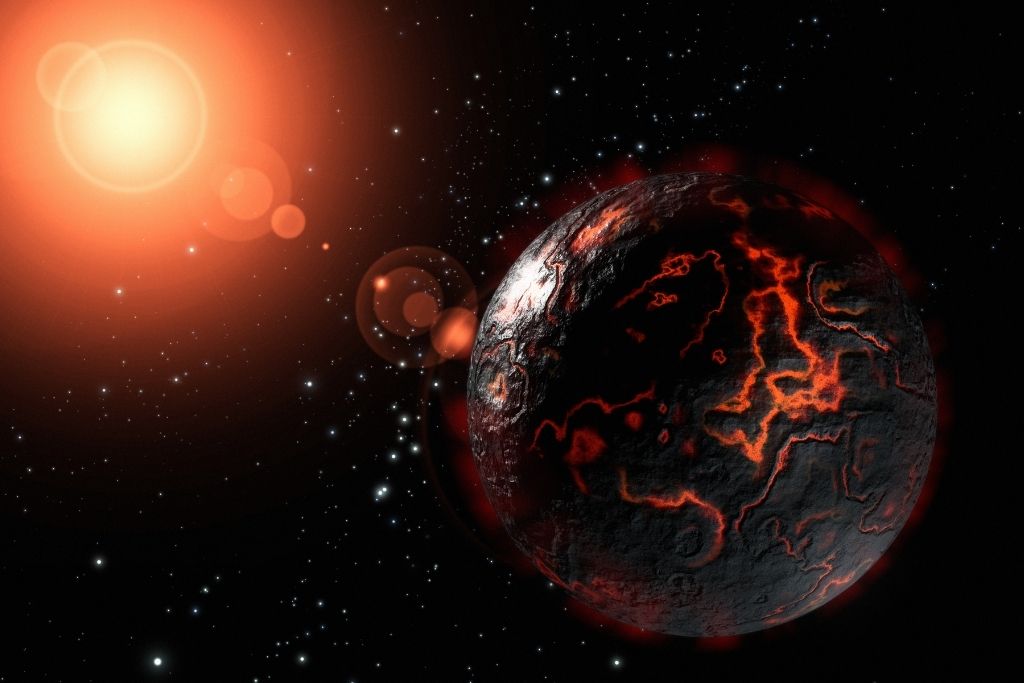 A lava planet is a theoretical type of planet with molten lava covering its exterior. Lava planets are believed to have severe volcanic activity due to a recent collision event. They are believed to be located near their respective stars.

As its name implies, an iron planet is predominately made up of iron. They also have a limited or utterly absent mantle. The mantle is a type of layer usually surrounding the core.

The largest planet in our solar system that is an iron planet is Mercury. However, there may be even larger exoplanets

that are iron planets.

An ice planet is a planet with an icy surface of chemical compounds that can be readily evaporated, such as water, ammonia, and methane.

A helium planet has an atmosphere that is made up mostly of helium. Astronomers believe these planets are made after high temperatures of a nearby star cause the evaporation of a lighter gas, such as hydrogen, and leave an atmosphere made up of helium in their wake.

A gas dwarf, also called a mini-Neptune, is less massive than Neptune but similar in that it has a thick hydrogen-helium atmosphere and most likely layers of ice, rock, or liquid oceans.

A gas dwarf is a gas planet with a rocky core that, over time, has accumulated a thick hydrogen, helium, or other vaporous covering.

Desert planets are hypothetically terrestrial planets with a desert-like surface and similar dry, hot weather conditions. This type of planet was portrayed in the fiction novel Dune.

Some studies have found that desert planets may be more common than Earth-like planets. The same studies also found that Venus may have once been a habitable desert planet, and they predict that Earth will one day become a desert planet due to the Sun’s increasing luminosity.

The coreless planet has no core. It is made up entirely of a mantle.

It’s possible that a coreless planet might be rocky, like earth, but it has no metallic middle and thus, would have no magnetic field.

Presently astronomers cannot tell for sure if it has a core because there are no telescopes that are able to show such small planets nor determine their chemical composition. Yet, by studying the planet’s parent star, it may provide insight into the existence of a core. By looking at the planet’s star, they can know the iron-silicate ratio and some of the chemistry that was there when the planet formed.

is another hypothetical planet that is thought to have a higher concentration of carbon in its makeup than oxygen. It is also presumed that carbon planets have cores made of iron or steel, which is similar to terrestrial planets.

A carbon planet is also known as a diamond planet. Surrounding the iron or steel core would be molten silicon carbide and titanium carbide. Then, above that would be a layer of carbon that would have the form of graphite that could contain a foundation of diamonds. Thus, during volcanic eruptions, it would be possible that mountains of diamond and silicon carbides would appear on the surface. 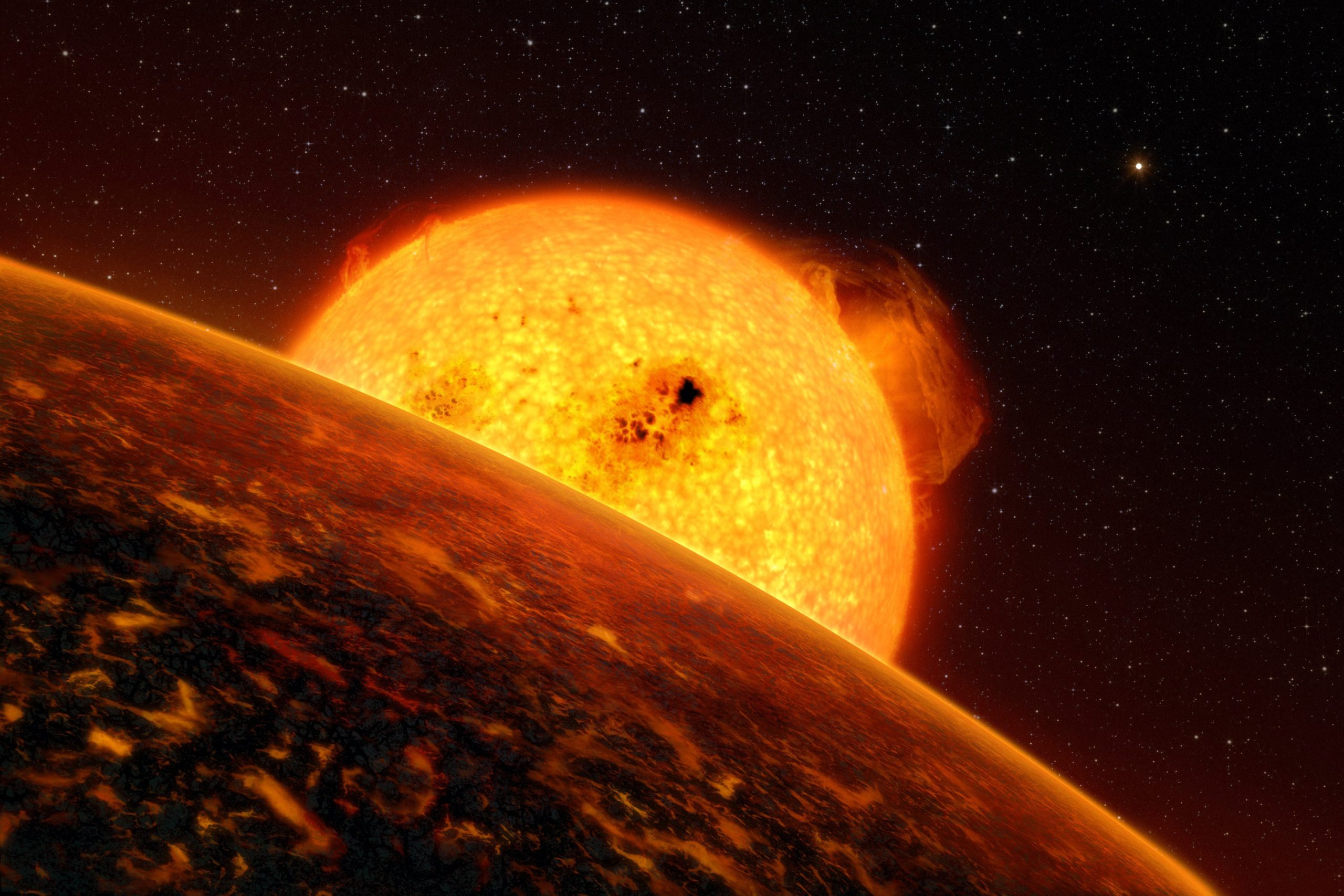 These planets are not in our solar system, but there are several of them that have been observed. They are a hypothetical class of celestial objects that revolve close to a star that was initially a gas giant but had its atmospheres stripped away from the nearby stars, leaving a metallic and rocky core behind.

The planet COROT-7b may be the first Chthonian planet to be discovered.

Because there is no consistent concrete method to classify planets outside the Solar System, there is no exact answer for the total number of planet types. Astronomers have confirmed more than 4,000 exoplanets orbiting distant stars. But they are so far away that they cannot be seen with an optical telescope.

To discover their planet type involves studying the components surrounding them. To do this, astronomers use a method called spectroscopy. It consists in taking the light from a star, planet, or galaxy and passing it through a spectroscope, which is like a prism that lets you split the light into its component colors. This enables you to see the chemicals that are being absorbed or emitted by the light source.

Spectroscopy can also give you more information about the direction the object is moving, if it’s moving toward or away from you, and, from this new information, a whole host of knowledge can be extracted.

The planet types listed above are just a sample of the common types that have been recorded and studied. The list is not exhaustive.