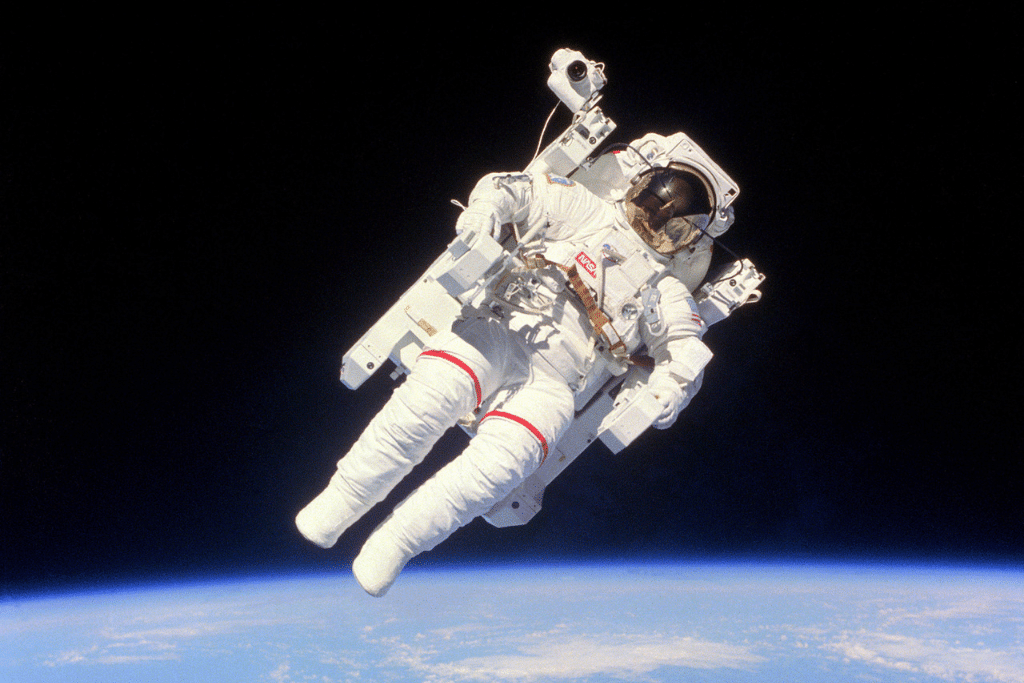 Braving the stomach-crushing mysteries of space has always had a daring draw to the adventurous – who didn’t want to be an astronaut at some point in their childhood? But space travel is difficult and inconvenient. For example, astronauts can’t even go into space without wearing specially made suits designed to help them stay alive. So, how do spacesuits work?

Spacesuits also include a life-support backpack that contains important assistive elements, like a warning system and a radio, as well as pure oxygen and cooling water to maintain a good environment inside the suit even when the astronaut is not connected to the spacecraft.

What Layers Make Up Spacesuits? 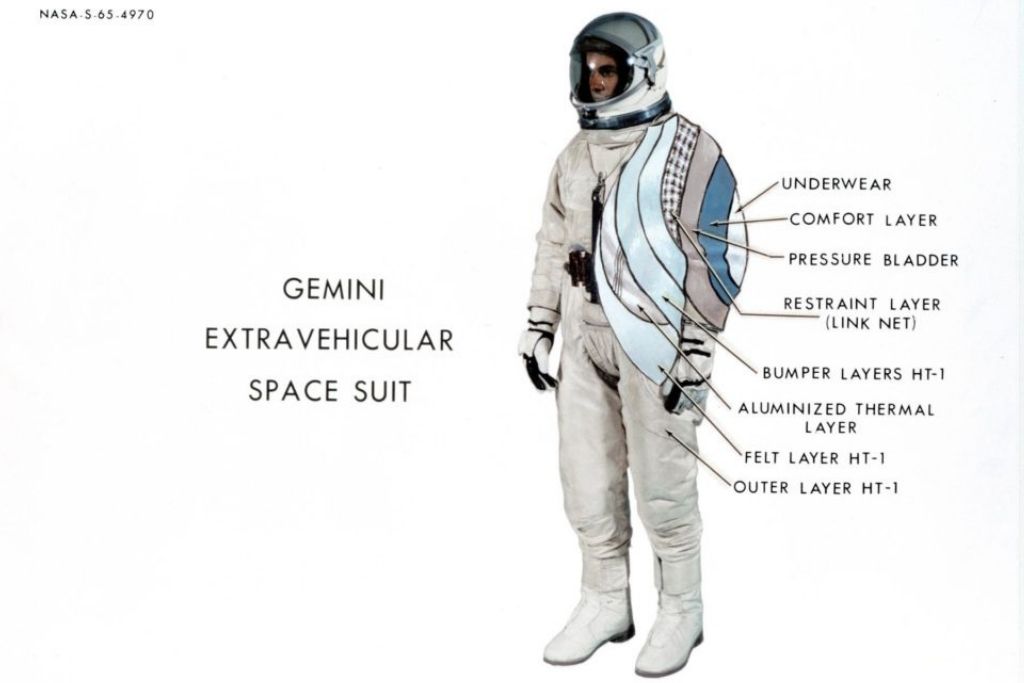 Modern spacesuits, also known as EMUs or Extravehicular Mobility Units, are made of thirteen layers. They include two layers that function as an inner cooling garment, two layers that act as a pressure garment, eight layers called the thermal micrometeoroid garment, and one layer as the outer cover.

Spacesuits are made with lots of different materials and special fabrics, including Nomex, Kevlar – famous for its use in bulletproof vests – Gore-Tex, Mylar, neoprene-coated nylon, Dacron, urethane-coated nylon, spandex, and nylon tricot.
Not only are these layers sewn together to create the suit, but they are also cemented together to ensure a sturdy seam.

Why Are Spacesuits Pressurized?

Having the right pressure inside a spacesuit is important. If the pressure isn’t right, the fluids in an astronaut’s body could begin to boil. The correct pressure keeps the astronauts’ bodily fluids liquid

Imagine a bike tire. There’s a tough outer shell made of rubber, and there is a more vulnerable inner tube that fills up with air inside. Spacesuits are made similarly. The outer shell is made of a durable material that helps restrict the inflation of the inner shell, which is blown up like a balloon inside. This helps maintain the proper pressure.

Normal atmospheric pressure is 14.7 pounds per square inch. The spacecraft will also maintain a normal atmospheric pressure. Inside the spacesuit, however, the pressure will be much lower, at only 4.3 pounds per square inch. Just like divers resurfacing too quickly can get decompression sickness and risk serious brain damage, astronauts can also become severely ill if care isn’t taken to match the pressure both inside and outside the suit while transitioning.

How Do Astronauts Breathe in Spacesuits?

On Earth, we talk about breathing oxygen, but in actuality, our atmosphere is only 21% oxygen. There are a few other elements, but the majority of our air is actually made up of nitrogen. Because of the low pressure in the suit, astronauts are given pure oxygen inside the spacesuit.

Humans breathe out carbon dioxide, but this would build up in the suit and become dangerous. So spacesuits use special lithium hydroxide canisters – either in their life-support backpack or back on the spacecraft – to remove it.

How Do Astronauts Go to the Bathroom in Spacesuits?

Modern spacesuits are equipped with a Maximum Absorption Garment

, or MAG, that collects all urine and feces. It functions like a giant diaper so that astronauts don’t have to take time away from their work during their long shifts – up to seven hours – out in space.

You might wonder why they don’t just pop back into the spaceship for a bathroom break, but it’s not that easy. Because the suits are pressurized, either the whole spacecraft or an airlock will have to have its pressure adjusted to match the pressure in the spacesuit when the astronaut comes in and suits up to go back out. If this is not done, the astronaut can get the bends, just like when divers surface too quickly from deep water.

Having this large absorbent diaper built into the suit means that astronauts can go about their important business without worrying about their other business.

How Do Spacesuits Protect Astronauts From the Sun?

Have you ever wondered why spacesuits are often made with white material? The outer layer of spacesuits is designed with a light-colored reflective material to reflect the light of the sun. Spacesuits also have visors, blinders, and additional filters available to reduce glare, block direct light, and protect the astronauts from the severe brightness of the sun.

How Do Astronauts Stay Cool in Space?

Astronauts wear a special kind of undergarment called the LCVG, or Liquid Cooling and Ventilation Garment

, inside the suit. It has thin plastic tubes interlaced throughout the nylon tricot and spandex material so cool water can flow continuously to help with heat removal.

Why Do Spacesuits Have Backpacks? 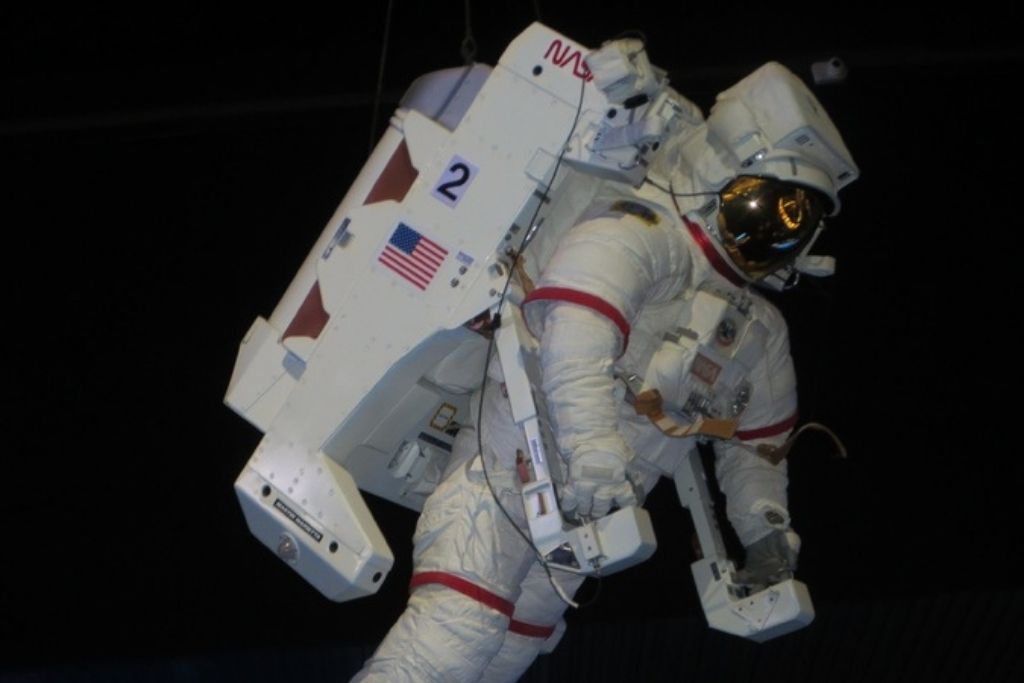 The life-support backpack you may have seen in pictures is called the Primary Life-Support Subsystem, or PLSS for short. It makes sure that the astronaut has a variety of important things at hand to help the astronaut stay alive and provide resources to prevent and deal with emergencies.

The PLSS, along with the Secondary Oxygen Pack, or SOP, makes sure the astronaut always has enough oxygen while out in space. The PLSS also powers the suit and removes carbon dioxide to maintain a healthy internal environment inside the suit.

The water used in the Liquid Cooling and Ventilation Garment is also stored in the PLSS. A warning system is present in the PLSS to alert the astronaut to vital information, and the PLSS also stores the radio equipment used by the Communications Carrier Assembly, or CCA, worn by the astronaut.

How Do Astronauts Communicate in Spacesuits?

Astronauts wear a special cap made of fabric called the CCA, or Communications Carrier Assembly. It includes microphones and speakers and works with the radio. Because the CCA is a cap, astronauts are able to communicate while in the suit without needing the use of their hands.

How Do Astronauts Monitor Their Vital Signs in Space?

Spacesuits include an EMU Electrical Harness, or EEH. Astronauts wear these inside their suits. The EEH connects to the radio and also to the bio-instruments inside the backpack of the suit, or PLSS. It monitors the astronaut’s vital signs – like body temperature, heart rate, and respiration rate – and also enables communication.

How Do Astronauts Keep Track of Everything They Need to While Wearing Spacesuits?

Astronauts wear a special device on their chests called the Display and Control Module, or DCM. Sometimes it can be difficult to see this display, so astronauts use special mirrors mounted on their sleeves to help them. The DCM hosts LCD displays and also all of the important controls required to use the PLSS, or Primary Life-Support Subsystem – the life-support backpack.

Astronauts also wear checklists on their sleeves so that even if they forget procedures once they get out into space, they can read them off the list directly from their arms.

How Do Modern Spacesuits Work Different Compared to Older Spacesuits?

Spacesuits have undergone many iterations as technology has advanced in missions have become more complex. In fact, with every new destination, spacesuits are improved to better match the needs of the astronauts and the work they are going to perform.

For example, in the past, spacesuits needed to remain tethered to the main spacecraft by a special umbilical cord that connected them to the ship. This cord provided oxygen so the astronauts could stay alive while working in space. Now astronauts can use the Primary Life-Support Subsystem outside the ship.

Older spacesuits used fans to cool astronauts whose body temperatures had increased during work. Unfortunately, the fans didn’t work so well. Astronauts became dehydrated and their visors would fog up as a result of the ineffective cooling system. Now spacesuits have the Liquid Cooling and Ventilation Garment to keep them cool instead.

In addition, spacesuits that were just designed to do spacewalks were not good enough for walking on the moon. Before the famous moon landing mission, new spacesuits had to be designed that included sturdy boots and gloves with rubber tips so that astronauts could work on the moon effectively. These spacesuits also included filters to help astronauts see despite the severe glare of the sun they might encounter on the moon.

The Extra Vehicular Mobility Unit is the most recent type of spacesuit, but scientists are already developing a new and improved version to help future astronauts on Mars.