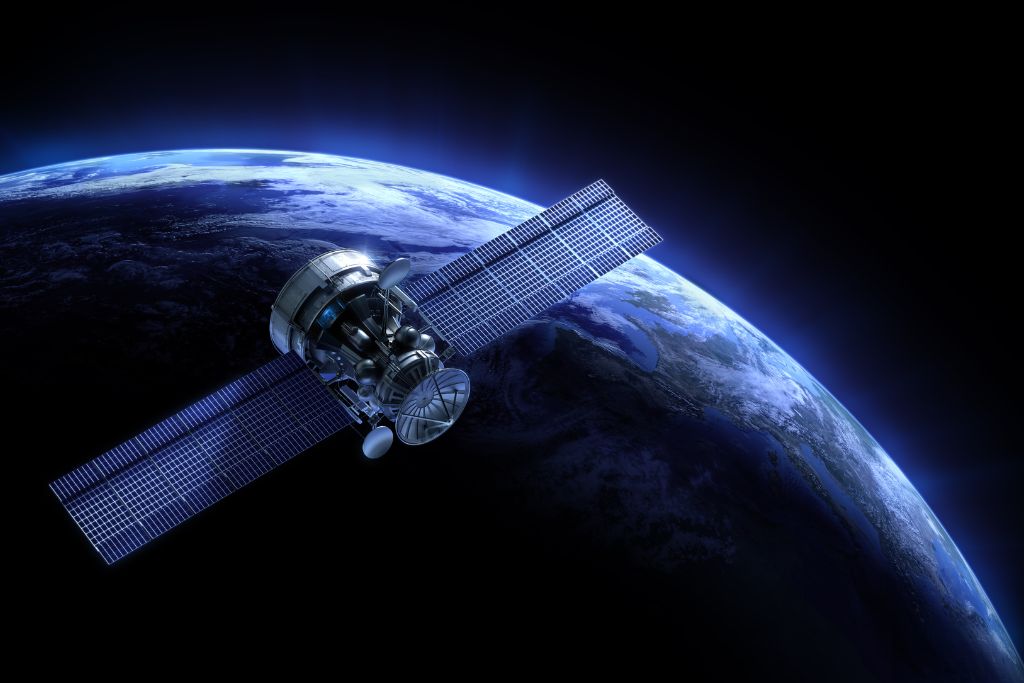 There are thousands of man-made satellites that orbit Earth. They can be used by meteorologists to take pictures of the planet and help predict the weather. They can be used to help scientists study other planets, the sun, black holes, and faraway galaxies. And they can be used to provide high-speed internet service to customers on Earth or as a Global Positioning System to help those with a GPS receiver find directions to where they want to go. But how do satellites get into space and stay in orbit?

Satellites are carried into space by hitching a ride on a rocket. There are commercial businesses with rocket launch capabilities, such as SpaceX, where you can contract with the company to place your satellite in space. These businesses have rockets that are capable of safely carrying satellites as large as several tons. Once the satellite is launched into space, it is propelled with enough momentum to use the Earth’s gravitational pull to keep it in space and orbiting Earth. Let’s look at this further. 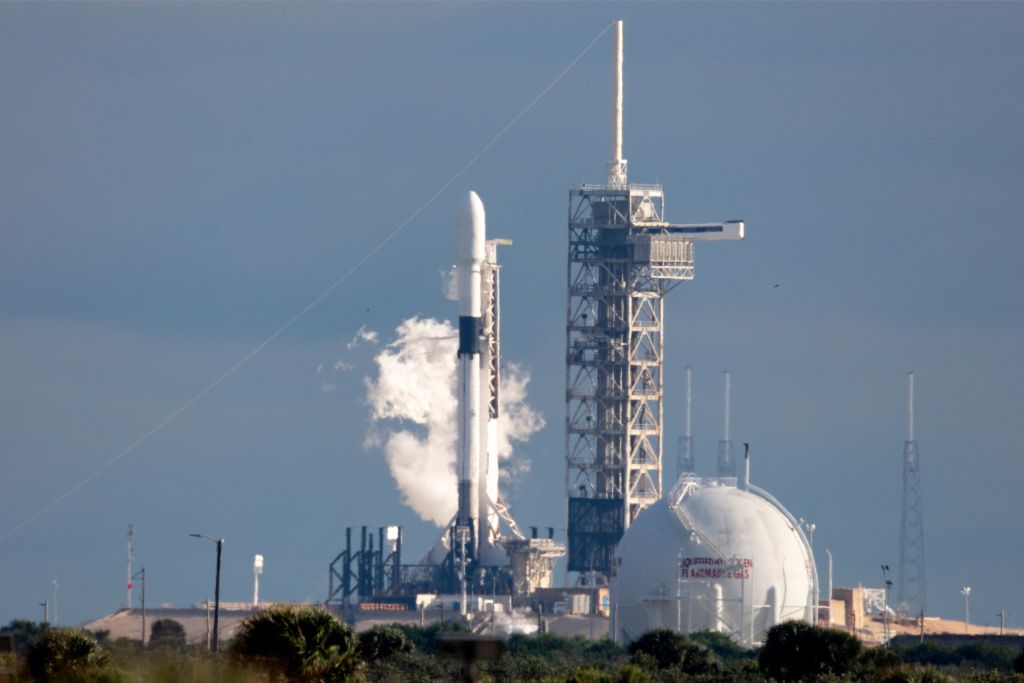 Once the satellite is placed in the rocket

, the rocket launches straight up to get through the thickest part of the Earth’s atmosphere as quickly as possible. Because of Earth’s gravity, which is constantly pulling down on the rocket, this is not an easy thing to do. As the rocket burns propellants (fuel) and pushes out the exhaust, it creates an upward force called thrust. The rocket needs enough propellants so that the thrust is greater than the force of gravity pulling the rocket back down to Earth.

In order for the rocket to be able to fly above most of the atmosphere, it needs to reach a speed of at least 17,800 miles per hour. At this speed, it should not be pulled back down to Earth.

But How Does the Rocket Know Where to Go?

The rocket has a control mechanism it uses to stay on course. This mechanism uses the inertial guidance system to calculate any adjustments the rocket needs to make to follow the path outlined in the flight plan. The inertial guidance system is an electronic system that continually gauges the rocket’s position, velocity, and acceleration, providing navigational data or automatic control, thereby bypassing the need for communicating with a base station.

How Many Satellites Are There?

As of last year, almost 3000 operational satellites were circulating the planet, owned by nearly 100 different countries. About 550 of these satellites are in geostationary orbit. Geostationary means that the satellite stays in the same place in the sky no matter the Earth’s rotation.

Satellites used for communication are typically geostationary satellites. That means, if you have an internet satellite receiver, you will always be able to pick up a signal no matter where Earth is in its rotation because the satellite rotates at the same rate as Earth.

The challenge is to place the satellite in the precise location so that the geostationary orbit, which is circular and not elliptical like Earth’s orbit is around the sun, stays in place and maintains a constant altitude and speed. Neither can change, or it could interrupt service.

But Won’t the Satellites Bump Into Each Other? 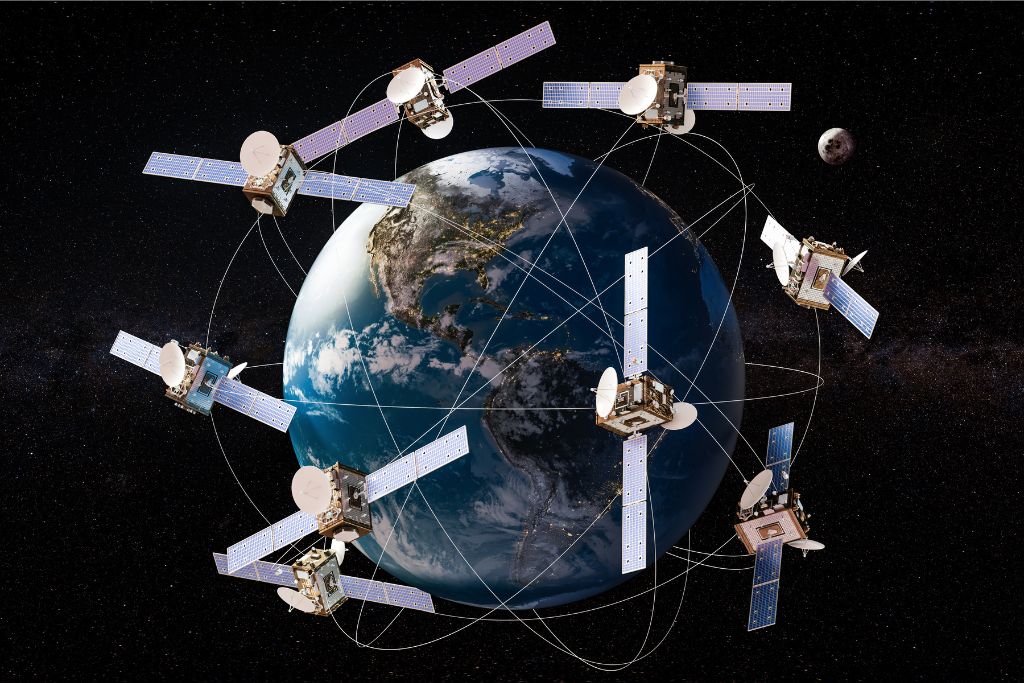 There is only one geostationary orbit in space for every satellite that needs to be placed in a geostationary orbit. This is at 22,223 miles from the equator, and as of February 2022, there were 541 active satellites occupying this orbit. What this boils down to is real estate in space. The company that is in charge of selling orbital slots is an agency that is part of the United Nations called the International Telecommunications Union (ITU). They assign each satellite a slot at this perimeter.

As of February 2022, there are only 1800 geostationary orbital stots available to be purchased for a satellite to occupy, and countries and companies that haven’t already placed a satellite in space have already claimed most of the unoccupied spaces.

Now That the Satellite Is in Space, How Does It Stay There?

is a property of matter, in this instance, the satellite, by which it remains at rest or in constant motion in the same straight line or, as with the satellite, the same orbit. The only way it would change is if something external forced it to change.

For a satellite placed at around 150 miles from Earth, it would need to attain an orbital velocity of approximately 17,000 mph. If there were no gravity, the satellite’s inertia would carry it off into space.

is the force that a planet uses to draw objects toward its center. Anything that has mass also has gravity. Objects such as Earth and other planets with more mass have more gravity.

The mass from Earth is what produces the gravity that keeps your body on the ground. All of Earth’s gravity comes from its mass. Yet the further you go away from Earth, the weaker the gravity. The closer you or an object is to Earth, the stronger its gravitational pull is.

Have you ever held two strong magnets close together, one in each hand? My kids do this all the time with two elliptical magnets they have.

If you hold the magnets parallel to each other but far apart, nothing happens. But as you slowly move them closer and closer together, you will start to feel a slight pull. Then, as you get closer and closer, the pull gets stronger and stronger until the magnets seem to jump right out of your hand and clink together.

Just like the pull of the magnets gets stronger as they get closer to each other, so does the pull of gravity get stronger when satellites are placed closer to Earth.

Now, with the rockets, once the rocket reaches the correct speed and is at the proper spot to place the satellite, it will launch it into space. The launched satellite will have the momentum from the rocket to propel it into space in one direction, and, at the same time, Earth’s gravity will pull it in another direction. The balance achieved between gravity and momentum keeps the satellite orbiting around Earth.

Like the magnets, satellites that are placed in an orbit closer to Earth will feel a stronger pull of Earth’s gravity. Thus, to stay in orbit, they will need to travel at a faster pace than satellites placed further away.

Because Earth also rotates once every 24 hours, a satellite that is placed 22,223 miles from Earth will stay in a fixed position. This is where the geostationary satellites are placed.

Do Satellites Stay in Space Forever? 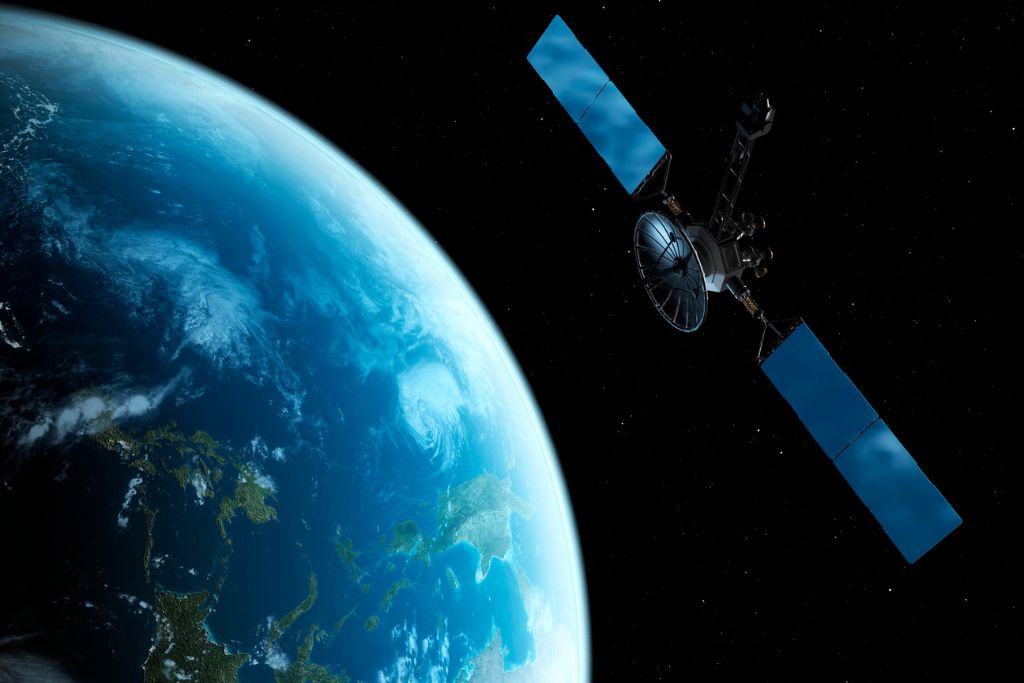 The life of a satellite will depend upon its position, as well as other factors. The closer satellites are to Earth, the more likely they will run into traces of Earth’s atmosphere which will create drag. Drag decays the satellite’s orbit and causes it to slow down and lose energy. When this happens, the orbit gets smaller and smaller until it gets to a part of the atmosphere where friction builds up and the satellite burns up.

Satellites placed in a higher orbit, such as the geostationary orbit, could possibly stay there forever, just like the Moon continues to orbit Earth. However, a typical satellite generally has a lifetime of between five and 15 years, depending upon the satellite. They haven’t yet been designed to last much longer than that. Either the solar arrays stop working, or they run out of fuel that helps them stay in orbit. So when they reach the end of their life, they hopefully get moved to a graveyard orbit. This doesn’t happen to all satellites that have died, but it’s the general desire to clean up outer space.

Now that you’ve discovered how satellites get into space and stay in orbit, you will have a lot to share with your friends and family the next time you access your GPS for directions, listen to satellite radio, or watch satellite television.